From Memoir to Novel

#ICYMI, It Started With a Memory

What did? Out of the Desert.

That memory was triggered by an old black-and-white photograph of two kids hiding in a fort they’d dug in the desert. My cousin, Jerry, and I loved to play cowboys and Indians, or war, or anything else that required a hole in the sand. We’d lie outside, gazing up at the stars at night, and dream about what we were going to be when we grew up. Kinda like most kids at 10, 11, 12.

But, when I looked at that picture, I knew I had to write about us. I started with a short story about daydreaming on the high Mojave desert near Victorville, CA. I was 11; Jerry was 12. I remembered a lot about how we dreamed of being something other than kids in school. I published that short story in The Best of the Virginia Writers Club: Centennial Anthology, 1918-2018 as “Toad.” I was pretty satisfied with it.

Guess I wasn’t through, because Jerry kept returning in my dreams some sixty years after he died. He wasn’t satisfied. I wasn’t through with his story. I couldn’t write a memoir of our life together, because I didn’t have enough material. What I could, and did, do was imagine what he would have become had fate not stepped in. I gave Jerry a life. I gave him the future he never had. And now, looking back on Out of the Desert, who’s to say this isn’t the exact life my cousin would have enjoyed.

So, do you have a memory? Or an idea of something that might have happened? Do you want to tell it? Well, darn it. Tell it. Shout it loud and clear. Let readers know how much you loved the person you’re writing about. Fictionalize the story when you run out of memories. It’s all right to do that. It’s your story. Own it. Tell it. Share it. You’ll be glad you did.

Out of the Desert is available on Amazon in print and ebook formats.

I needed to put the trauma of the demise of my corporate life behind me and get on with something I could control. I can control my writing, and the time I spend on it, whereas I cannot really have much of an impact on my company. Yes, I still do my job and help get ready for the ultimate break up of our intellectual property. That no longer gives me any true satisfaction, since I spent a lot of time building our intellectual property collection.

I returned to a short story I’ve been working on for a few weeks. “Toad” is about 1100 words and features a ten-year-old boy spending a day on his own with two friends. I’ve read this at Lake Writers and Valley Writers, each time receiving excellent feedback to improve the tale.

One criticism kept coming up. I don’t identify one of Toad’s friends as a burro until the last page. Why? Because it’s clear from the beginning that the pal is an animal. Since the animal doesn’t have any lines, I didn’t see fit to say something as obvious as “Fatso was a burro.” 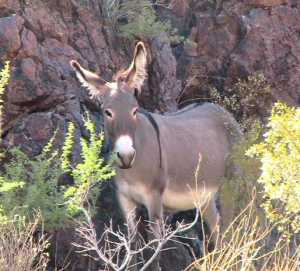 Then the question of a burro versus a donkey became a bone of contention. Some critics said they were identical. I maintain that the burro is slightly different from a donkey. A bit of research showed that I was right. I love being right.

What’s the difference? A burro is a feral descendant from Spanish donkeys, smaller that the donkeys brought over by the English later. Both are true donkeys, but come from different DNA sources.

Fatso is a burro. Having grown up in the California desert, I saw enough of these shaggy feral beasts to know one when I see one. And in my mind’s eye, Fatso is a fuzzy burro.

To my friends who wanted me to explain this in the story, NOT going to happen. For those who read this blog, this might be the end of the conflict.

Whatever. At least I’m writing and enjoying every word.